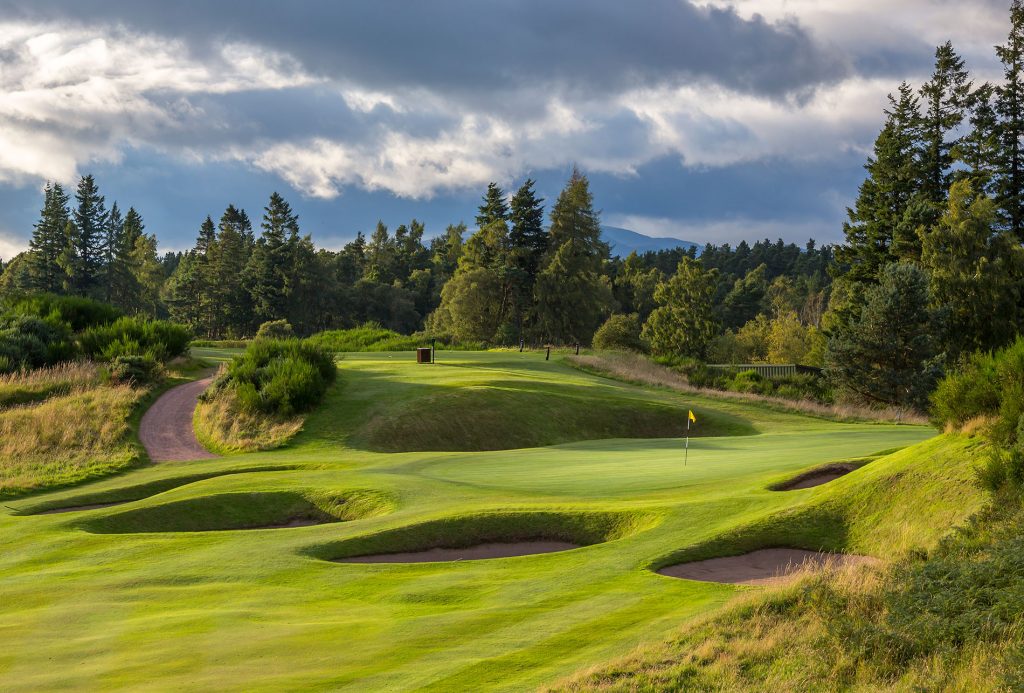 King’s Course will host the British Senior Open for the first time ever in 2022, Europe’s only Senior Major Championship

Set amidst 850 acres of Scotland’s most beautiful scenery surrounded by mature Perthshire countryside, there are few finer destinations. The Gleneagles Hotel is one of the most famous luxury resorts in the world.

In 1908, the idea for Gleneagles came to Donald Matheson, General Manager of the Caledonian Railway Company. He had a dream to build a “Palace in the Glens” which would attract noble and wealthy railway travellers. Matheson commissioned James Braid (the five-time Open Champion) to design the King’s and Queen’s courses, assisted by Major C.K. Hutchison and Matheson himself. Both courses opened in the hotel grounds in 1919.

The hotel opened in 1924 and it was described as “a Riviera in the Highlands” and “the eighth wonder of the world”. It has been an aphorism for decadence and opulence ever since and to date the only resort in Europe to hold both the Ryder and Solheim Cups.

The golf at Gleneagles is widely considered to be the best that moorland can offer and the King’s course is surely the best moorland track in the world. The sweeping views of the Ochil Hills, the peaks of Ben Vorlich and the Trossachs are simply ravishing. The holes blend perfectly into the landscape. The springy fairways wind their way through punishing rough, strewn with heather and gorse. Many mature pines, silver birch and rowan provide natural amphitheatres on a number of the holes.

The King’s course hosted the first informal Ryder Cup match between Great Britain and the USA in 1921. No half points were awarded for this fledgling event and a strong British team that included James Braid won the competition 9 points to 3.

A number of other important events have been played over the King’s course, including the Curtis Cup, Dunhill Trophy, Scottish Open and the WPGA Championship of Europe. Lee Trevino, standing on the 1st tee of the King’s course, remarked: “If heaven is as good as this, I sure hope they have some tee times left”.

Opened as nine holes, the Queen’s was extended to 18 in 1925. It is the “pretty little sister” to the King’s and boasts moorland turf that is close to being as satisfying as that of a links, and its scenery is dreamy. While the King’s famously offers views over the Ochil Hills, Grampians and Trossachs, the Queen’s looks largely inward, a canvas of natural ridges, mighty pines and Loch an Eerie. The Queen’s in many expert opinions is the finest course in the British Isles under 6000 yards.

The bedrooms at Gleneagles are as glorious as the landscape that frames them, with a luxury 5 star hotel feel. All individually inspired by the mountains and meadows, rivers and lakes of the Perthshire countryside.

In a room with more than a touch of theatrical magic, The Strathearn Restaurant is a classical Franco-Scottish fine dining restaurant with a real sense of romance. The walls of this iconic room have seen nearly a century of history and exceptional dining experiences.

Enquire Now
"I would like to say a very big thank you for organising such a wonderful holiday, we had a fabulous time. Your organisation was superb, it makes such a difference just having to “turn up” knowing everything is going to work."
Chris & ChristineRobin Hood
"Thanks so much for another fantastic golf holiday. Pat and myself really loved the hotel, we enjoyed playing the superb courses, the banter with like minded golfers and the fun of the group dinners."
Rich & PatWarwickshire
"Thanks very much for a great holiday, this is our first taste of group tournament golf and we loved it."
Tim & ElaineUpton by Chester
Previous
Next