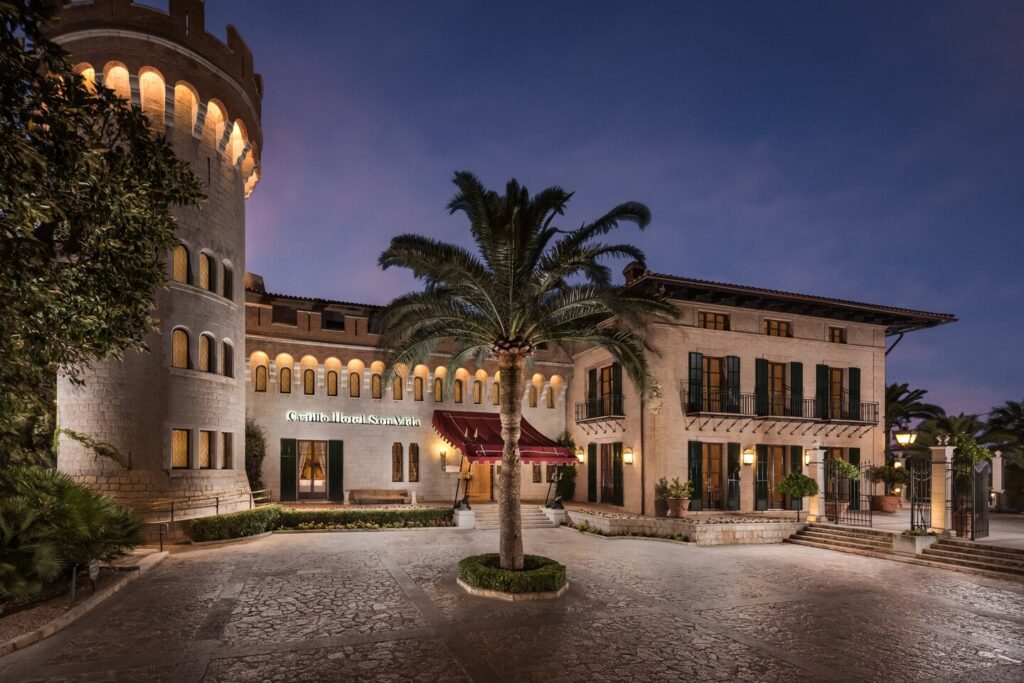 The Majestic Expression of Majorca

Perched high on a hill and commanding magnificent panoramic vistas of the bay of Palma is the sumptuous five-star ADULT ONLY Castillo Hotel Son Vida. Dating back to the 13th century, this castellated, luxurious property set in pristine gardens promises first-class service and superlative golf facilities.

From the imposing grand entrance to the sweeping and majestic central staircase in the lobby, the hotel exudes opulence on every level. A towering, multi-coloured glass dome by leading German artist, Nils Burwitz sets the tone, while in the hotel’s aristocratic former dining room are 10 original canvasses of hunting scenes by celebrated 19th century Majorcan artist Ricard Anckermann.

There are grand, stylish salons from a bygone era, a priceless Old Masters collection and fine antiques and artefacts at every turn. It’s not surprising that the hotel was a favourite of the likes of Grace Kelly, Aristotle Onassis, and Maria Callas.

An impressive level of comfort is offered in all the guest rooms. All have large balconies or terraces with views over the bay or to the lush Mediterranean gardens. Rooms are classically furnished and include a king-size bed, desk, comfy armchairs and marble bathroom with twin basins and separate shower. As would be expected in such a luxurious establishment, air-con, DVD player, television, minibar, pillow and robe menu are provided.

The hotel has two restaurants, Es Castell which serves sophisticated Mediterranean fare in its grand, glass-fronted premises overlooking the bay of Palma, and informal Es Vi, offering a superb selection of tapas. The latter has the feel of a cosy bodega and lives up to its name with an outstanding selection of vintage local and international wines. Chef Rafael Dengra gives a modern twist to traditional tapas with inspired dishes such as goat cheese, walnut and aubergine croquettes, cod on creamy yucca pureé and carpaccio of tuna and monkfish.

Guests are spoilt for choice with the extensive buffet breakfast served in Es Castell restaurant. Every conceivable egg and savoury option is available as well as pancakes, charcuterie, international cheeses, and an entire Majorcan section of local dishes. There are also high quality yoghurts, muesli, fresh bread and pastry offerings.

Aside from Sa Font pool bar that provides drinks and snacks all day, the Bar Armans serves up exotic cocktails which can be relished on its enormous terrace which affords spectacular views over Palma bay.

The golf is to be played over three stunning courses, each with their own character and style offering their own distinct experience.

Son Vida is the oldest golf course on Majorca, part of the Balearic Islands in Spain, having originally opened for play in 1964. The course is renowned for being the most beautiful spot on the island. With stunning views across the bay and Sierra de Tramuntana it is well known by players from all over Europe having hosted European Tour events in the 1990’s with Seve Ballesteros amongst its champions. Son Vida can look tight from the tee but the fairways open out and make good use of the hilly terrain. The greens are large and slightly elevated calling for some accurate shots and good course management.

Son Quint is the newest addition of the three courses, having been inaugurated in 2007. In the style of its neighbours at Son Vida and Son Muntaner, Son Quint rolls through the hills of the charming countryside outside Palma. Make sure you take a moment to enjoy the spectacular views of the town from the 8th and 17th holes.

The stand-out layout of the trio and a regular feature in Spain’s top 100 courses is the stunning Son Muntaner. Designed by the esteemed designer Kurt Rossknecht, the course opened in 2000 and is a championship layout in every sense of the word. Considered to be one of the most beautiful courses on the island, it is surrounded by a variety of Mediterranean flora and fauna. In 2016, the club took on the ambitious project of completely reseeding the golf course, leaving it now as one of the best conditioned layouts in Europe. Those who take up the challenge of Son Muntaner can experience a truly unique attraction on the 15th tee: “Sa Capitana” the thousand-year-old, oldest olive tree on Mallorca.

"I would like to say a very big thank you for organising such a wonderful holiday, we had a fabulous time. Your organisation was superb, it makes such a difference just having to “turn up” knowing everything is going to work."
Chris & ChristineRobin Hood
"Thanks so much for another fantastic golf holiday. Pat and myself really loved the hotel, we enjoyed playing the superb courses, the banter with like minded golfers and the fun of the group dinners."
Rich & PatWarwickshire
"Thanks very much for a great holiday, this is our first taste of group tournament golf and we loved it."
Tim & ElaineUpton by Chester
Previous
Next