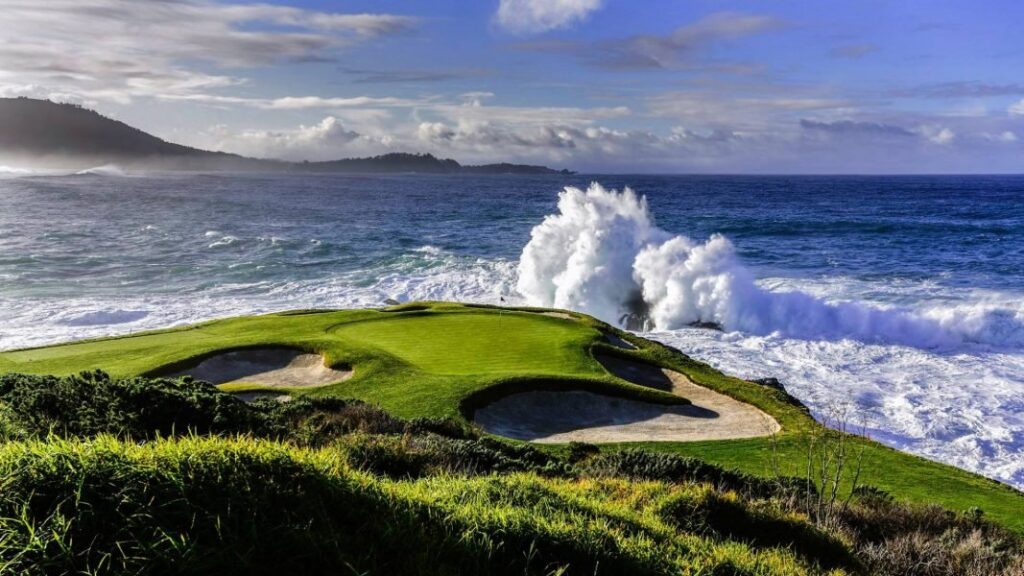 “If I had only one more round to play, I would choose Pebble Beach. I loved this course from the first time I saw it. It’s possibly the best in the world.”  Jack Nicklaus

Arguably the most beloved golf course in the entire world, Pebble Beach is an integral part of the history of the game, having seen the rise and fall of many of the game’s greatest players.

Tucked between Pacific Grove and Carmel on the Monterey Peninsula lies the coastal community of Pebble Beach. From the Monterey pine–studded Del Monte Forest to the glassy waters of Stillwater Cove, the region is packed with so much natural beauty that there’s an iconic view nearly everywhere you look. It’s a place where both elegance and Mother Nature’s raw spirit reign.

Amongst this dramatic scenery lies four of the top 50 ranked golf courses in the USA, one of which has been voted “the best golf course in the world”

As an annual co-host of the AT&T Pebble Beach Pro-Am on the US PGA Tour, Spyglass Hill’s championship pedigree has been validated by  the game’s very best. If Pebble Beach is the Greatest Meeting of Land and Sea, then perhaps Spyglass Hill should be dubbed the Greatest Meeting of Sand and Trees. The first five holes have been described as the greatest start to any golf course in the world!

Co-host of the First Tee Open on the PGA Champions Tour since 2014, Poppy Hills is the only completely tree-lined course on the Monterey Peninsula. Each hole is chiseled through the towering Monterey Pines of the Del Monte Forest and the course is consistently ranked inside the Top 100 in the country.

Designed by Robert Trent Jones Jnr & Tom Watson, The Links at Spanish Bay unveils some of the most spectacular seaside views at Pebble Beach. The rolling fairways flow through and around the gorgeous dunescape, briefly weaving between towering Monterey Pines, before returning to the white sand of Spanish Bay Beach for a thrilling finish along the wind-swept coast.

Ranked the No.1 course open to the public in the USA, Pebble Beach has hosted six U.S. Opens, more than any other course over the last 50 years. The U.S. Women’s Open in 2023 will be played for the first time ever here just two weeks after our visit. Every February the PGA Tour visits for the AT & T Pebble Beach Pro-Am, a tradition that began in 1947.

No golf course in the world offers what Pebble Beach has, from its curving coastline and cliff-top setting above the Pacific Ocean to its entrancing, moody mix of sun and wind and fog. There isn’t a more thrilling and spectacular stretch of coastal holes than Nos. 5 through 10. You return to the sea at 17 and, of course, at 18, for an oceanfront stroll on the most famous finishing hole in the game.

With the sweeping California coast on one side and majestic Monterey Pines on the other, The Inn at Spanish Bay is the idyllic retreat. Set around a Scottish-style links golf course, the resort invokes both Scottish golfing heritage and local Spanish settler tradition. All guest rooms feature stylish and comfortable furnishings and a warm, cozy fireplace. Most rooms include a private patio or balcony, providing magnificent views of landscaped grounds, pine forests, rolling fairways or the Pacific Ocean. Each room also features complimentary Wi-Fi, flat-screen TVs with cable and lavish modern bathrooms loaded with signature amenities to enhance your stay.

A unique highlight of staying at The Inn is the bagpiper who performs daily at sunset on a mound just south of The Lobby Lounge’s terrace and don’t forget a ride down 17-Mile Drive, one of the country’s most scenic routes!