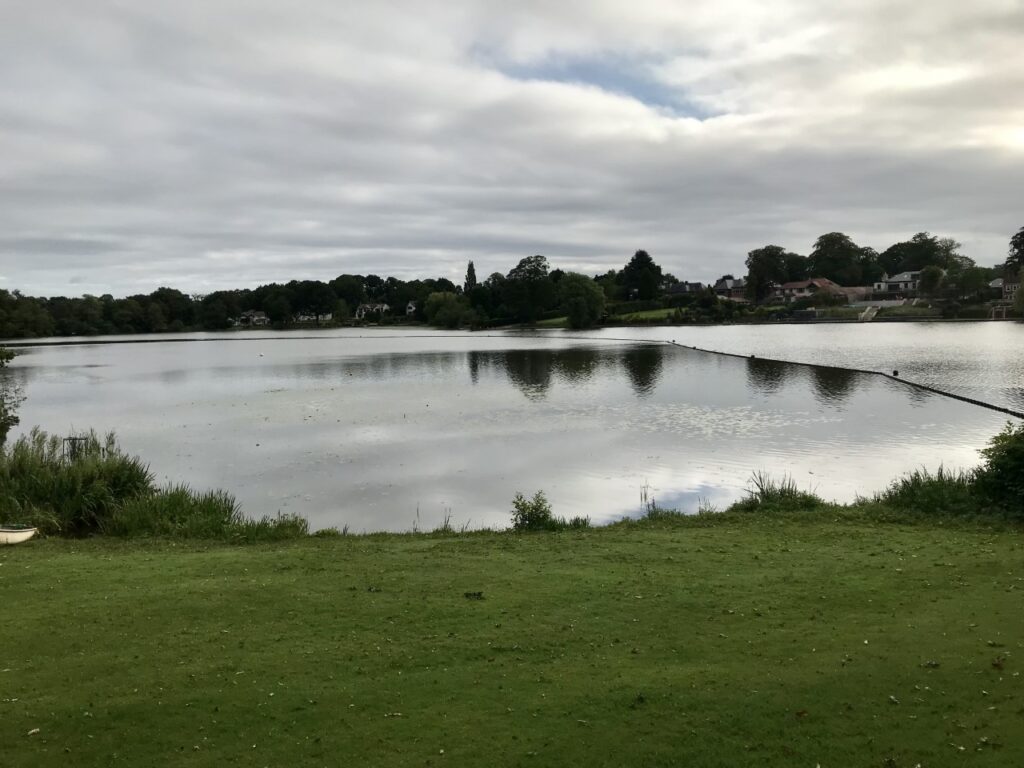 For the second time in only ten months we returned to Cheshire and to the award winning Mere Golf Resort & Spa near Knutsford. This 18-hole championship course has the added fun bonus of it’s driving range being the lake. The only time as a golfer you are encouraged to get your ball wet!

As our couples set off on day one the skies were overcast with the likely threat of rain. Not long into the round this became a reality and it became a day of umbrella up, umbrella down. This however, did not deter our hardy group and as the cards started to be posted in became clear the damp conditions had not affected the scoring.

By the end of the day 9 scores of 40pts or more had been recorded with John & Margeret Villiers together with Mark & Veronica Barlett on 42pts. One ahead of these on 43pts were the duo of John Adam & Pamela Little but our overnights leaders with a magnificent score of 44pts were John & Hilary Rusby from Reading.

Our group dinner in the evening took place in The Riley Room of the hotel. The walls are adorned with 2 million pounds worth of original golf artwork donated by local artist Harold Riley. It gave a perfect backdrop for a wonderful evening of fun and laughter and talk of what tomorrow might bring.

Day two dawned with the skies still overcast but with no sign of rain. The temperature had dropped and a few woolly hats were being worn. Most of the couples at the top of the leaderboard were playing at the rear of the field so the result was not going to be known until the very last card was in. Midway through the day and now with the temperature rising, the team of Tony & Liz Ulph carded a scorching 45pts to go with their day 1 score of 40pts and put the cat amongst the pigeons. This gave them a 36 hole aggregate total of 85pts. Was it going to be enough? Next came the partnership of Ray & Kaye King who matched the “best of the day score” of 45pts to come up just one point shy of the Ulph’s.

It just left overnight leaders, John & Hilary Rusby to possibly changed the result. As they played the last, a tricky par 5 finishing by the lake,  Hilary’s pitch into the green came up just shy of the putting surface. Her next chip shot ran a few yards past the pin leaving a testing downhill putt. There was now one last chance for victory! It looked like the putt was going to get away but at the last second rimmed round the hole…. and dropped. By just one shot the Rusby’s had taken the spoils and the title of The Mere Mixed Pairs champions!

Our thanks once again go to all the management and staff at The Mere who always seem to go that one step further for Fairways. We look forward to returning next year!