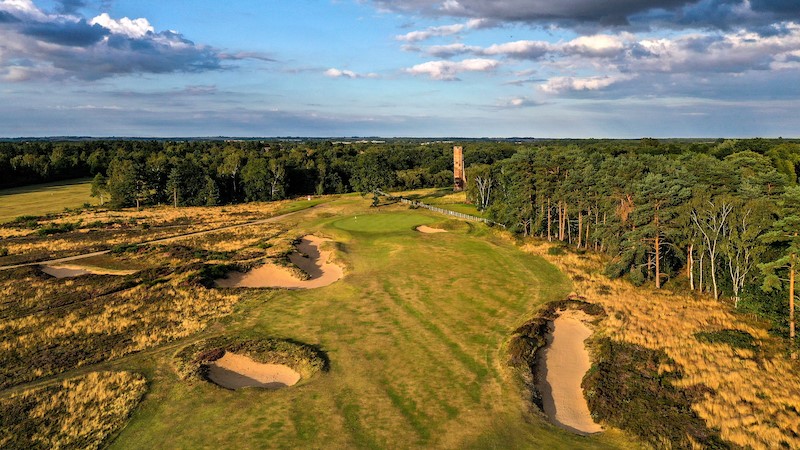 Our last event in August on our UK Swing, took us to the county of Lincolnshire and to the home of England Golf, the magnificent 36 holes at Woodhall Spa Golf Club. As well as the Donald Steel designed “Bracken” course, the club possesses “arguably” the best inland course in the British Isles with the world renowned “Hotchkin” layout.

A cool northerly breeze greeted the players on day one on the Bracken course. The course is quite forgiving off the tee but its defense is the large, firm undulating greens which makes for a very testing day with the flat stick. The strong wind continued throughout and it proved a stern test to get the ball close with your approach shots.

It wasn’t until the fourth group in and the pairing of John & Alison Moss before the leaderboard was lit up, when the “Goodwood” duo returned a very respectable 39 points. Kevin & Walsh then followed and were the first team to post the magic “40” mark. Fairways newcomers, Mark Hope & Kay Vickers returned and jumped to the top of the leaderboard after signing for a fantastic 41 points. This score led long into the day until one the final groups in and the pairing of Robin & Trish Tweedle putted out on the eighteenth green and posted a scorching “best of the day” 44 points to lead overnight by three shots.

We returned to our accommodation, the historic “Petwood” hotel, once home to RAF Squadron 617, better known as “The Dambusters” for a wonderful private group dinner. There was laughter and stories told and then thoughts turned to the challenge of tomorrow and the mighty, world famous “Hotchkin” course.

The “Hotchkin” consistently ranks as one of top inland courses in the British Isles. It is notorious for its deep, cavernous sand traps and is supremely challenging. The group awoke to kinder weather with the wind down from the day before and a slight rise in the temperature. Some were slightly nervous of what lay ahead but all were up for the task.

From the first card in it became clear the scoring had improved from the day before. Just the second group to return home and the pairing of John & Barbara Taylor carded a magnificent 43 points. The “Hotchkin” was being bought to its knees! Then two Essex duo’s comprising Mick & Hazel Jameison from the Rochford Hundred club and Kevin Boon & Angela West from Chelmsford, posted fantastic scores of 41 points. This was then matched from Edwin & Lol Lewis from Cambridge. Pipping them by just one point was another first-timer couple to Fairways, Rob Hankinson & Rachel Smith.

But what of our overnight leaders, Robin & Trish Tweedle? Had they managed to hang on to their slender lead or had the bunkers of the “Hotchkin” claimed two more victims? As they walked off the eighteenth green team “Tweedle” both had smiles on their faces as they signed off with another brilliant round firing 41 points to give them the title of “Woodhall Spa Mixed Pairs” champions.

Our thanks go to all the staff at both Woodhall Spa Golf Club and The Petwood Hotel for taking such good care of us over the two days!