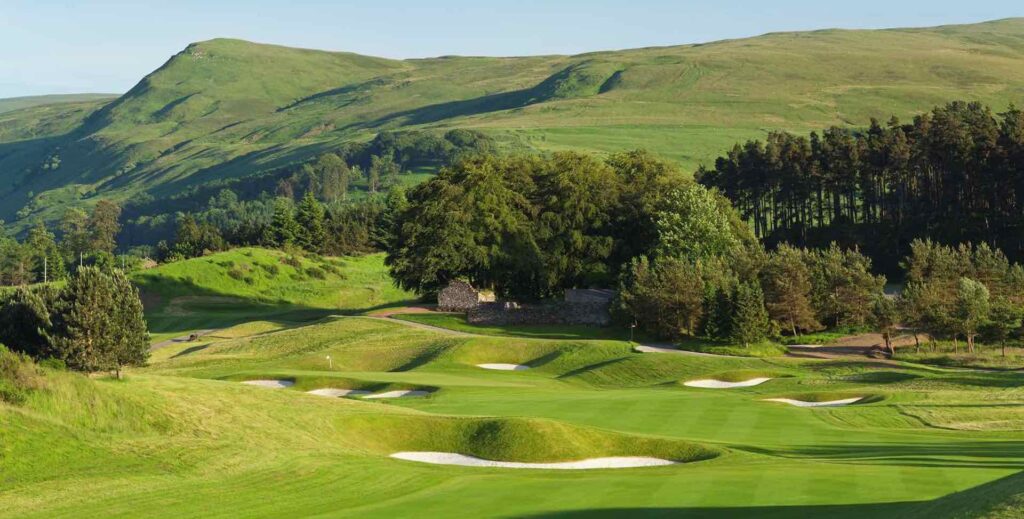 For the final two events of our summer UK Swing, we headed north to Bonnie Scotland and to our first stop, the No.1 ranked golf resort in Great Britain & Ireland, The Gleneagles Hotel. Set amidst 850 acres of Scotland’s most beautiful scenery surrounded by mature Perthshire countryside, it is one of the most famous luxury resorts in the world.

Because of dense fog over the course, play was delayed for about an hour before the group were able to commence and tackle the beautiful and very pretty Queen’s layout at the Gleneagles resort. Quite short by modern standards, many experts believe this to be the best course under 6000 yards in the British Isles. The fog gave way for light cloud and a little breeze and the opportunity to score well. This was confirmed when the very first card returned, by the low handicap duo of Horacio & Julie Ribeiro, posted a scorching 44 points. Was any couple going to threaten this fantastic score? A few came close with three teams, amongst them Steve Taylor and Cathy Podevyn, firing very commendable 41 points but no pair reached the dizzy heights of team Ribeiro and it proved to be the top score of the day.

The evening was spent in the hotel’s “Strathearn” restaurant for a superb group dinner with great conversation and maybe a little too much wine!

The group awoke the following morning to a stunning sunrise. With clear blue skies and the Trossach Mountains as a backdrop, it truly becomes a stunning setting. Today it would be the turn of the King’s course. A sterner test with many changes in elevation and a few “blind” shots to confront. Our overnight leaders were in one of the early groups to tee-off. Were they going to produce the goods to hang on and take the title? As the scores came in, it became clear the King’s was certainly proving to be championship test we all thought it would be. This course will in fact hold the British Seniors Open for the very first time in 2022.

Horacio & Julie signed for a solid 38 points giving them an aggregate total of 82 points. Our lowest handicap pair of the weekend, Bill Carey & Mandy Miller from Muswell Hill then carded a brilliant 40 points to put themselves amongst the leaders. Then from out of the pack and slightly under the radar, the Meon Valley pairing of Neil & Jean Dalton fired an incredible 44 points proving to be the best score of the day by four shots. This couple with their score of 38 points the day before over the Queen’s matched the winning total of 82 shared with the Ribeiro’s but because of a better second round score they took the title on countback in one of our closest finishes ever!