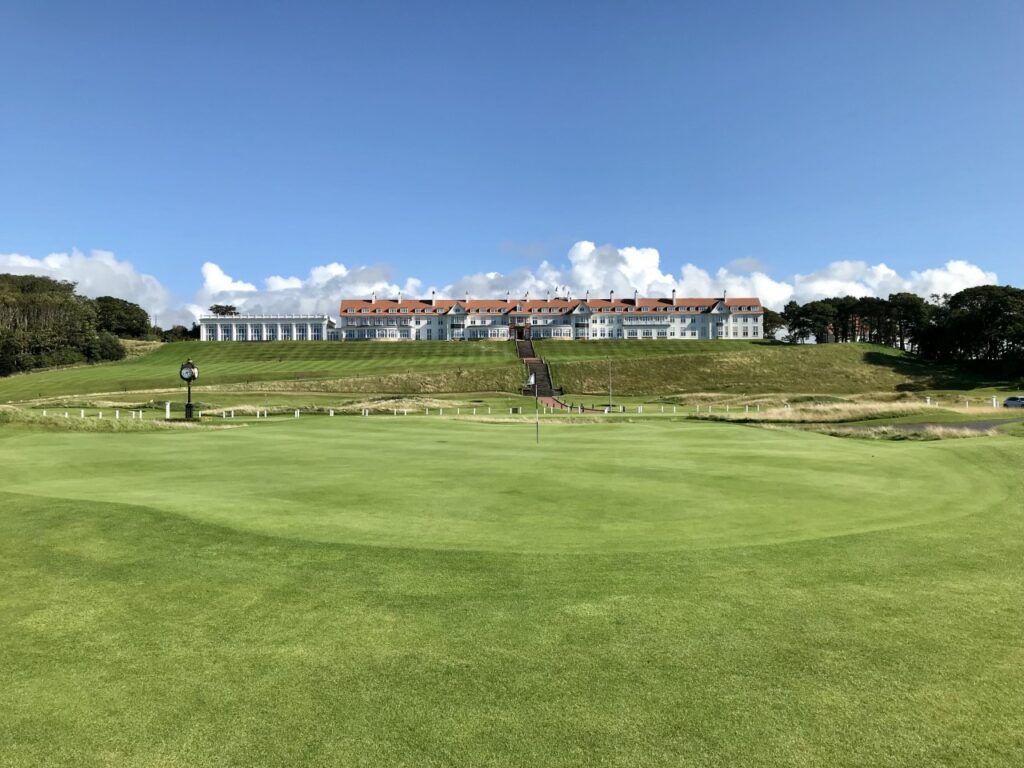 Approximately 100 miles from Gleneagles on the South Ayrshire coast, lies the Turnberry resort, possessing the UK’s No.1 ranked golf course the “Ailsa” After our inaugural visit last year, we returned to this stunning setting that has held the Open championship on four occasions.

Once again we were blessed with fantastic weather as our group set off on day one to tackle the “Robert the Bruce” course which in its own right is a wonderful links layout.

The early pace was set by Sid & Ta Cox from Centurion Golf Club with a brilliant 43 points. As Sid handed their card in he was buzzing with their play as he informed us it was his best game for as long as he could remember. It also turned out to be a memorable day for 3-handicapper Shaun Davies, his wife Clare and their playing partners Ian & Pauline Morris. Shaun stepped on to the tee of the par 3 10th on “RTB” and promptly went and holed his iron shot to produce a wonderful “hole in one.”

As the day progressed the Cox’s score was being threatened. “Turnberry” specialists Steve & Liz Shepherd came up just one point shy after signing for 42 points and this was closely followed by Steve & Teresa Hogg & Phil Luke & Mandy Broome from the Forest of Arden club who both matched this score. But as the dust settled and the sun dipped down behind the “Ailsa Craig” Sid & Ta remained top of the leaderboard.

The group dinner in the evening was in “The Champions Suite” where the walls are adorned with pictures of past “Open” winners and where much talk was of what a great day was had, Shaun’s great achievement and what tomorrow might bring taking on the UK’s No.1 ranked golf course.

Wind and rain greeted the first couple of groups as they commenced play on day two. But within minutes it had blown over and made way for clear blue skies and just a touch of wind to make it a perfect day on one of the most famous links courses in the world. Since the new changes to the Ailsa, the stretch of holes from 4 to 11 are some of the most breathtaking in the British Isles and on a perfect day only get enhanced by what is already a truly wonderful golfing experience.

The ever consistent duo of Horacio & Julie Ribeiro were first in the house and posted 39 points to match their same score of the previous day to give them a total of 78. Straight on their heels and in the very next group Steve & Liz Shepherd fired another wonderful 42 points also matching their previous day’s efforts to set the clubhouse lead on 84. In the same fourball George & Carol Rae, with combined handicaps totaling just 12 carded their best ever Fairways score to date to shoot a “best of the day” score of 43 points.

But how did our overnight leaders fare?  Not to let the title slip from their hands, they played a wonderful round of golf to sign for 42 points to give them an aggregate score of 85 and to take the Turnberry Mixed Pairs by just one point.