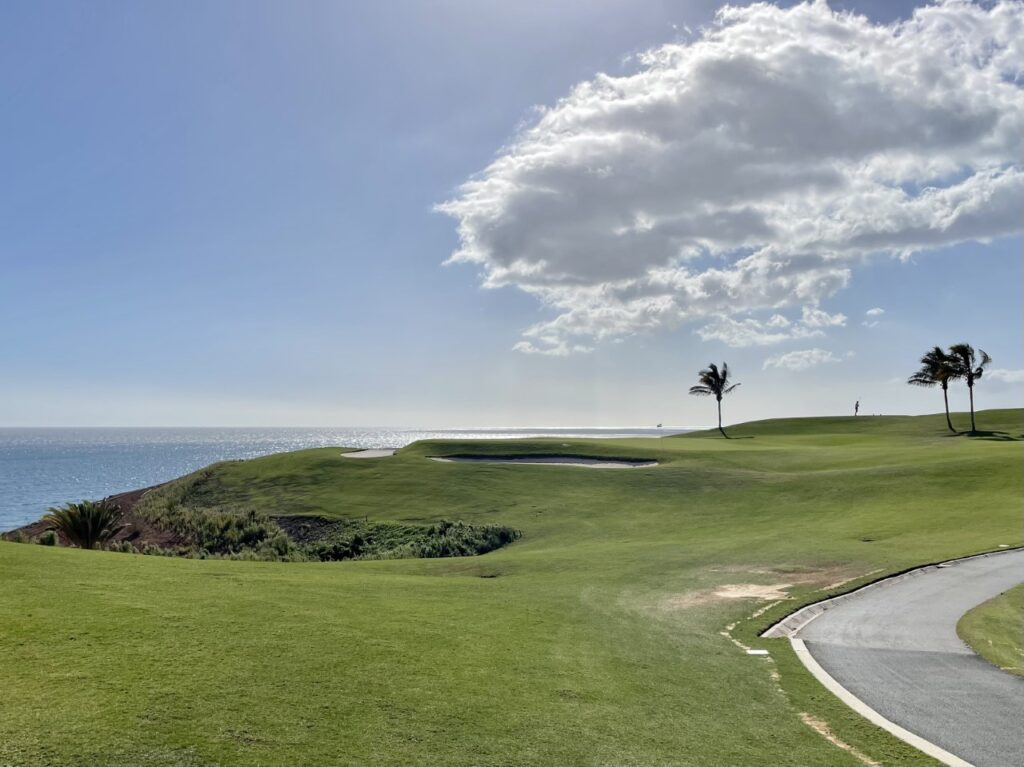 For our final overseas Mixed Pairs event of 2021, we visited the beautiful island of Gran Canaria and  the stunning Lopesan Villa del Conde. Situated along the promenade of Maspalomas, this grand hotel is ideally located for the many chic shops and restaurants located along the beachfront.

After a lively registration, the following morning saw the first days play at Meloneras, the recent venue of the Gran Canaria Open on the European Tour. Even with clear blue skies and the temperature in the 70’s, scoring was tricky with a strong wind and slick greens.

The result was a very congested leaderboard after 18 holes with 4 couples on 38pts and our leaders, Steve Wyeth & Janet Perry, out in front by one on 39pts.

Just a short journey along the coast on day 2, took us to the No.1 ranked golf course in the Canary Islands, the breathtaking Anfi Tauro layout.

Over three million cubic metres of earth was shifted to create this masterpiece designed by the Dutchman Robert von Hagge. One of the most ambitious build projects in Europe, it took ten years to complete. The resulting play experience is a rollercoaster ride of emotions and elevation changes in one of the most remarkable settings for a game of golf.

With hardly a breeze, the perfect playing conditions meant a good score was possible. As the scores were compiled at the end of the day, five couples broke the “magical” 40 mark with both Matt & Angie Harrison and Tony & Liz Ulph firing a fantastic 41pts apiece.

On the “Tauro” our winners were Phil Luke & Mandy Broome from the Forest of Arden club, with the best of the day score of 42pts.

After a well earned day off, the group headed back to the Meloneras course. Having been acquainted with its layout, hopes were now high for some great scoring and a chance to climb up the leaderboard on “moving” day. However, the wind was now at its strongest than it had been all week and was proving to be a stern test.

The “in-form” pair Phil Luke & Mandy Broome were first to return to the clubhouse with a fantastic 39pts, closely followed by Bill Bowell & Jane Coleman who matched their score. As the rest of the couples posted their cards this proved to be a score hard to match. So, with the dust settled on round 3 the countback was calculated and Phil & Mandy once again finished on top of the leaderboard. They would go into the fourth and final round with a 2 shot lead over Tony & Liz Ulph.

Just a short five-minute drive from our hotel bought us to the destination of our final round, Maspalomas Golf Club.  In a flat, tree-lined course, good scoring is obtainable but the player needs to be mindful of the very quick putting surfaces which act as the defence of this layout. Unfortunately, as the wind grew stronger during the day, the couples once again had to work hard for every point scored.

The first to break out of the pack was duo Chris & Liz Wallace, returning their best of the week score of 41pts.  Also consistent all week, Rod & Sara Barnes posted a very respectable 39pts to jump up the leaderboard. However, it wasn’t to be the day our leaders Phil & Mandy were hoping for, in spite of playing brilliantly all week with back-to-back wins on rounds 2 and 3.

This just left Tony & Liz Ulph. Could they produce the round to seal the deal? In true winning style, they returned to the clubhouse and signed for a “best of the day” score, matching the Wallace’s 41pts to give them overall victory by 7 shots.

Later that evening after our final group dinner, they were crowned “Gran Canaria Mixed Pairs” champions.

And so, the week came to an end. From the first minute to the last, the group created an atmosphere unmatched. There was lots of fun and laughter, friendships were rekindled, and new ones made. This is the ethos of Fairways holidays, and we will do our utmost to continue this trait during these unprecedented times.

We are returning to Gran Canaria in December 2022, but this time with the added bonus of playing at the oldest golf club in Spain, the Real Club Las Palmas. Find out more here ››