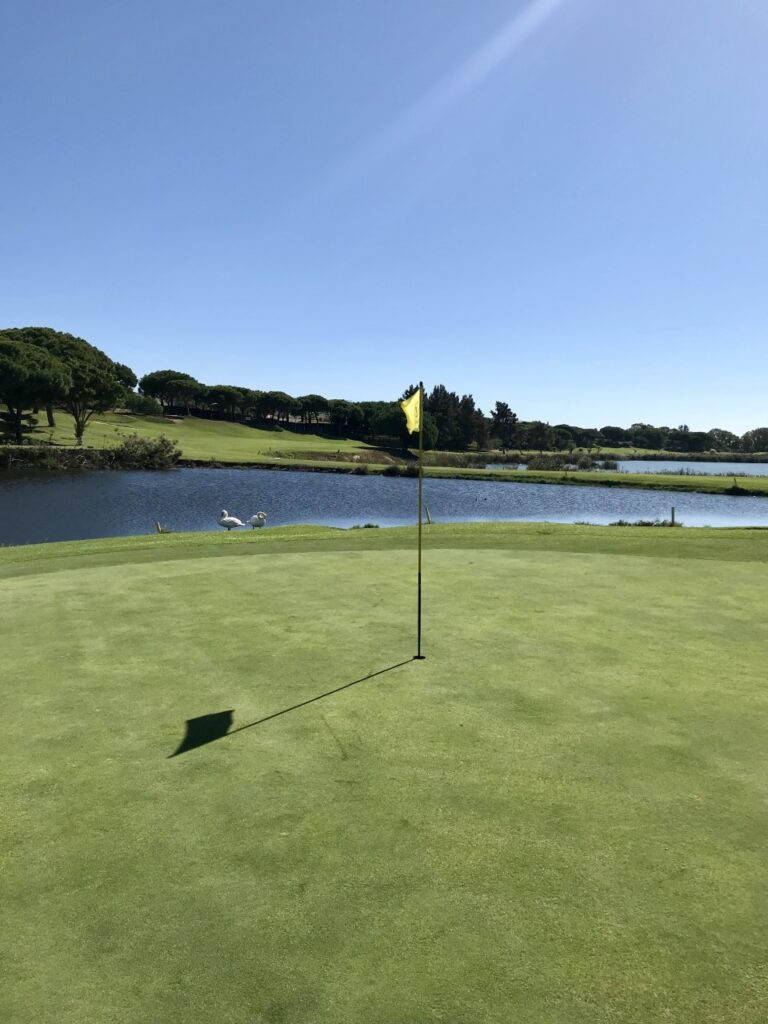 Just a 40-mile journey along the coast bought us to our next leg of our Portuguese fortnight and to one our most popular venues, The Dona Filipa Hotel. 28 couples met to take on the famous San Lorenzo layout on the beautiful Quinta do Lago estate.

Once again the weather was incredible with wall to wall sunshine. While the hotel was taking great care of us with three fantastic group dinners during the week, a fierce battle was taking place over the top-ranked San Lorenzo layout.

On the front nine of this stunning course you make your way along the Ria Formosa, then returns inland before a fearsome finish culminating with the infamous 18th hole where you have to negotiate the wet stuff for the entire length of the hole. Many a dream has ended here in a watery grave.

Quickest out of the blocks on day one was Stuart & Val Robinson who posted an incredible “best of the week” 45pts. Robert & Sylvia Cockell were three points back posting a brilliant 42pts and these proved to be the only scores in the 40’s.

The course was proving to be a stern test as the scores started rolling in on day two. Still, no pair managed to break out of the 30’s until late in the day, however the low handicap duo of Peter & Angela Reeves from Frilford Heath signed for a “best of the day” 40pts. This put them joint top of the leaderboard with Bill Bowell & Jane Coleman both on 75pts as the group went into a well-earned rest day.

The temperature was still in the high seventies as our group returned for round three. Our lowest combined handicap duo of Peter Lockett & Teddy Bevan set off in fine style, with Peter birdieing the first three holes. This set up a great day for the Oxfordshire pair who returned to the clubhouse having signed for 40pts. Also, the Essex pair of Mick & Hazel Jameison produced their best score of the week after shooting a fabulous 41pts. However, the day belonged to the Hindhead team of Stuart & Val Robinson, back to form, pipping Mick & Hazel on countback and recording their second victory of the week.

Five shots separated four couples heading into the final round. Who had the nerve to tame the San Lorenzo beast and take home the spoils? As it would turn out most of the leaders were in the first groups out. Bill Bowell & Jane Coleman returned with 34pts only for their playing partners and overnight leaders Peter & Angela Reeves to pip them by one to finish off with a four-round total of 148pts. Was this going to be enough with the rest of the field still to finish?

Tony & Jenny Wilson who had been lying second could not match their consistent form that they had shown all week, signing for 32pts and with Peter & Teddy scoring 35pts this left no one to catch the overnight leaders. Yet, more was to come late in the day, as Peter & Joy Leary who had been under the radar all week produced a “best of the day” 38pts which vaulted them up into second place.

Congratulations to Peter & Angela who showed consistent form all week around a very testing course. Many thanks to the Dona Filipa Hotel who once again took such great care of us all and also to San Lorenzo for producing such a wonderful examination of golf even if that 18th hole gives everyone fits!