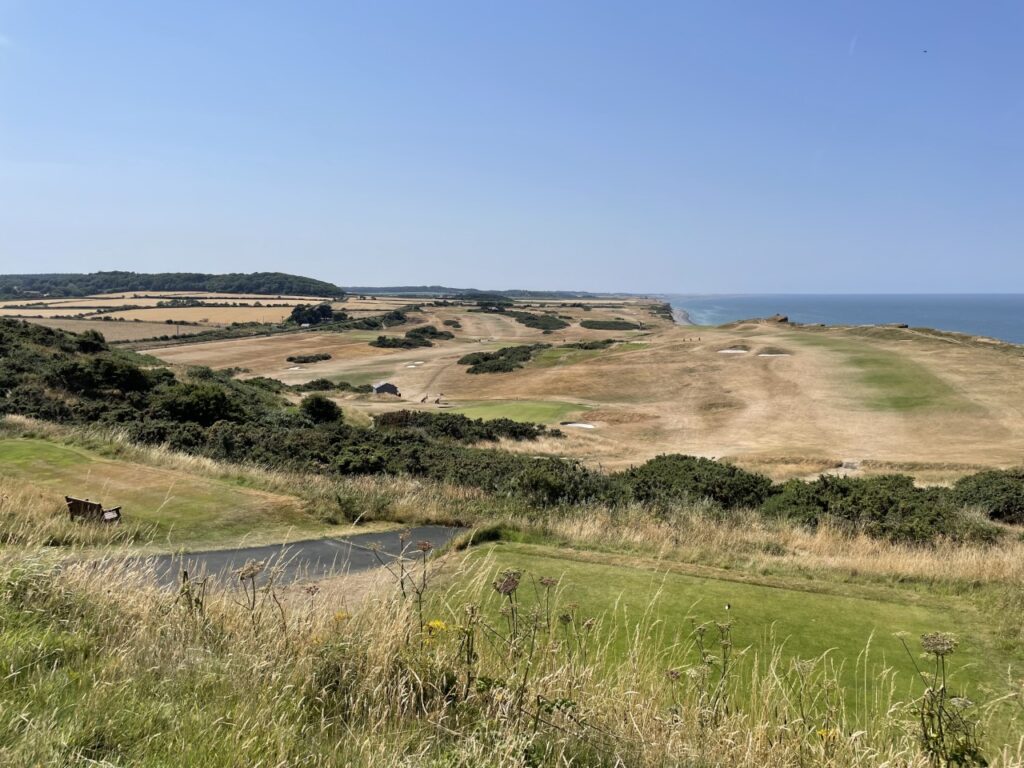 The two days spent on the North Norfolk coast will live long in the memories of all of us that were there, as they will go down in the history books as the hottest ever recorded to date.

Sheringham Golf Club is set amongst an unbelievable landscape, on the cliff tops of the Norfolk coast. This golf course is like no other, located on an undulating piece of land between the North Sea cliff edge and the North Norfolk Railway. Steam trains and vintage diesels pass along this track throughout the day.

The temperature was hot even as the first group got underway but thankfully the breeze off the North Sea was cooling and allowed for a comfortable round. With the fairways baked hard, players could take advantage of the great distances gained from the tee and reduce the course to a much shorter distance than normal. This became evident as the players returned back to the clubhouse and many were signing for scores in the 40’s.

The pairings of Roy Hutchings & Barbara Bateson, Howard & Hilary Ashton & Willie & Helen Rae all posted fantastic 43pts. The Forest of Arden team of Phil Luke & Mandy Broome then went even better with a brilliant 45pts.  Not to be outdone Claus & Liz Crede from Essendon then topped the leaderboard when as hot as the weather scorched around the Sheringham links in an incredible 46pts. Surely this could not be beaten.

Then as well as record breaking temperatures we had a best ever score recorded at a Fairways event. Matt & Angie Harrison from Walmley had a day not to forget as they signed for a unbelievable 49pts!

We all headed back along the coast to our hotel for the night, the fantastic Briarfield’s for a well earned drink and a wonderful group dinner together.

Located on the beautiful north west Norfolk coast, Hunstanton is a superb championship links course rated as one of Britain & Ireland’s ‘Top 100’ courses. Nestling in a stunning landscape of dunes and links grasses, the club was established in March 1891. It is the only golf course on the east coast of England where the sun sets over the sea, providing striking views throughout the seasons.

It became evident when we arrived at the course that this was going to be a day like no other. The cooling breeze of the day before had now turned into a hair dryer on the highest heat setting. By midday the temperature gauge was nudging the 40’s and many of our couples decided to call it a day and return to the sanctuary of the clubhouse and a cooling drink and shower.

The bravest battled on, consuming water like a leaking ship as the battle now become survival rather than the wonderful test of the Hunstanton links. Phil Luke returned, with his partner Mandy having retired only after a few holes, with a brilliant 37pts. His well earned first pint of lager didn’t touch the sides! Bryan & Pearl Powell one of only 2 couples to walk and complete their rounds, signed off with a wonderful 37pts. Willie & Helen Rae then matched this score that would turn out to be “the best of the day” in the very demanding conditions.

Our overnight leaders Matt & Angie had battled through the searing heat and were determined to complete the challenge. Not quite up to their magical play the day before, they had played solid to sign off with a great 36pts. Never had a title been so hard earned as they deservedly claimed the Norfolk Links Mixed Pairs title.

A special mention to the Briarfields Hotel and all its management and staff for wonderful accommodation, food & drink during our stay.