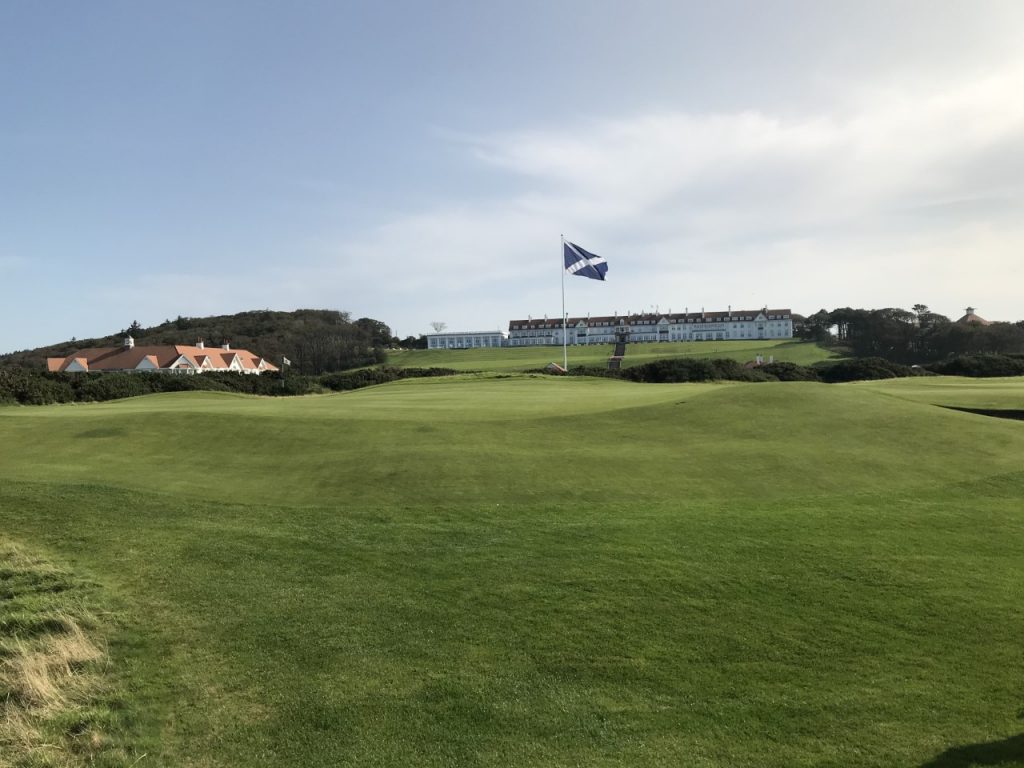 Our first UK event outside England this year, took us to the beautiful South Ayrshire coastline and the stunning Trump Turnberry resort. The majestic hotel sits upon the hill looking out on to two wonderful links courses. Both have recently been re-modelled with the Ailsa, having previously held four Open championships now ranked the No.1 course in the UK.

Day 1 saw our group awake to brilliant blues skies and the anticipation of taking on the “Robert the Bruce”. Not as well known as its famous sister, the course has recently had a complete overhaul and now takes the golfer on a thrilling journey to the rugged coastline and now sits beside its more famous neighbour perfectly.

As the first day drew to an end the leaderboard was tightly packed with six couples scoring in the 40’s. The evening meal took place in the “Duel in the Sun” restaurant which boasts fantastic views over both courses and we all watched the perfect day close as the sun set behind “Ailsa Craig”

Day 2 bought no change to the beautiful conditions with no wind and clear blue skies. Was the “Ailsa” going to be at its kindest and give up some great scores? The stretch of holes on this course from 4 – 11 are thrilling and the sceneary breathtaking. The par 3 9th begins a genuinely world-class sequence of three holes laid out along the waters edge. The tee shot at No.9 plays across the bay at Turnberry Point to a green beside the lighthouse, which serves as one of the world’s best “halfway huts.” The hotel forms an imposing backdrop to the last hole where many a dramatic moment has unfolded in Open championships.

As the scores starting filtering in it became clear our group were making the most of the benign conditions. A fantastic score of 45pts by Roger & Kath Kent led the way with the Bishop Stortford duo of Mark & Jane Lee hot on their heels just one point behind. But late in the day, Tony & Sylvia Cockell produced not only the best score of the day but the whole weekend with a remarkable 48pts!

To play the best course in the UK with weather rarely seen in these parts, capped off a Fairways weekend that will live long in the memory. As one club member quipped ” The last time the weather was this good, Tom Watson was beating Jack Nicklaus in the 1977 Open Championship. The Duel in the Sun”

A special thanks to all the staff on and off the course at Trump Turnberry who made our stay so special!

We will see you next year!

Winners of the Scottish Mixed Pairs